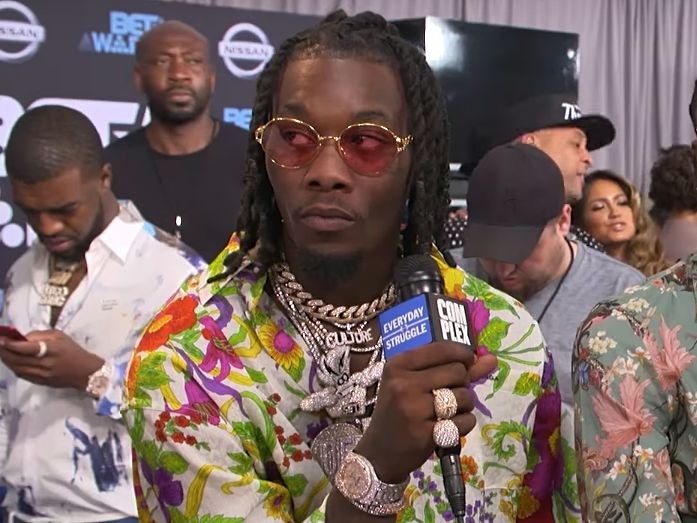 Twitter – Offset used his Twitter fingers on Friday (April 13) to go off on someone with a series of angry posts and fans are scrambling to figure out what (and/or who) he’s mad about.

“I see u niggas dick riding too,” he began. “Yal niggas need to worry bout HITS PUT SUM OUT. And you niggas don’t want smoke keeping talking shit in the studios.”

I see u niggas dick riding too

Private text messages between Offset and Cardi B were allegedly exposed online earlier this week. During the exchange, Cardi says she’s going to beat up Nicki Minaj over the “MotorSport” drama. Minaj addressed the Migos single — featuring Cardi and Minaj —  during her interview with Beats 1 Radio on Thursday (April 12).

The site responsible for the alleged leak had its Twitter account suspended shortly after releasing the text messages, leading many to conclude they did belong to Offset and Cardi.

Fans think Offset is pissed because Cardi got caught bashing the self-proclaimed Queen of Rap.

BRUH HAS ANYBODY READ THESE LEAKED TEXT MESSAGES BETWEEN OFFSET AND CARDI!!! I AM DYING!!!… SHE WAS MORE MAD ABOUT MOTORSPORT THAN HIM CHEATING… GOODBYE BIRD BRAIN

The second theory has to do with Bay Area rap group SOB x RBE who recently said “Fuck the Migos” during a concert at The Observatory in Santa Ana, California.

“You can tell the Migos we the hottest group in the game,” Yhung T.O. declared before getting more antagonistic. “Fuck the Migos!”

This one has to do with “MotorSport” once again but it’s more specifically about Minaj’s original verse, which contained the line, “If Cardi B the QB/ I’m Nick Lombardi.” As Minaj explained in the Beats 1 Radio interview, she was told to remove Cardi’s name by Atlantic Records allegedly at the “Bodak Yellow” rapper’s request.

Some fans believe Offset is fuming because Minaj outshined everyone else on the track.

Nicki never said there was beef with anyone. Infact she called Quavo get baby several room times even tho in my opinion he’s a *****. My guess? Quavo saw the messages offset was sending Cardi and is becoming a petty king.

All Nicki Minaj said was the REASON why she had to change the verse and Offset and his puppet came out like they hard 😂 The truth hurts huh? Nigga talking bout hits when the only reason MS popped was because of Nicki’s verse that washed all of y’all collectively.

So @OffsetYRN really was mad at Nicki and Quavo being at Nicki’s studio together lmao Migos finna break up soon and Miss Minaj done did that. #chunli #BarbieTingz

Some thought his rage was aimed at Future after the HNDRXX rapper appeared to be standing up for Minaj in a subtweet but Offset quickly quieted that rumor.

Prior to Offset’s shut down, Twitter was convinced the two super rappers were feuding.

Lmfao. So Offset coming for Future and Young Thug because they taking up for Nicki? 😂😂 Nigga y’all couldn’t even beat Chris Brown ass. 🗣😂😂😂😂

Lmaooo @ Future & Offset Subtweeting Each Other.

Oh I KNOW Offset not beefin with FUTURE!!!!?? Am I really gonna have to delete every Migos song off my phone??! Lmao cuz I willl!!!!

The fifth theory involves London On Da Track’s joint “No Flag” featuring Offset, 21 Savage and Minaj. On the song, Minaj raps, “Lil’ bitch I heard these labels tryna make another me/ Everything you getting little hoe is cause of me,” which some perceived as a Cardi diss.

But shortly after the song’s August 2017 release, Black Barbie took to Twitter to deny it had anything to do with her.

I feel like this all stems from Offset being hurt over her No Flag verse.

Offset just mad he got bodied on No Flag & then him & his bitch got bodied on Motorsport. Niggas ain’t got no bars, they weak as shit.

Whatever Offset’s upset about, Twitter is here for it.

Check out more of their reactions below.

Nicki is kikiiing with Quavo. Offset is ranting on Twitter. His side chicks are contemplating what to leak next. Cardi is shaking in illiterate anger, while managing her cravings. Takeoff don’t know what the hell going on. Migos is in shambles. This is excellent. pic.twitter.com/FmKkMWackl

You know Offset is bothered when he stops speaking in crossword puzzle.

quavo, offset, takeoff, and cardi b at an emergency meeting after nicki exposed them and dropped chun li and barbie tingz #NickiDay #BarbieTingz #ChunLi pic.twitter.com/sueFy27dqs

What do you call Offset when he’s mad?
Upset pic.twitter.com/fr6Z8XQQAV