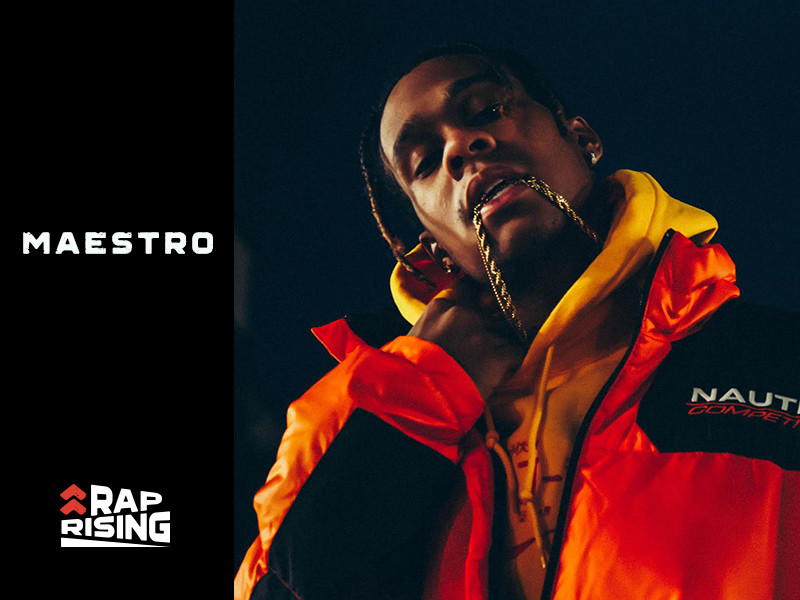 Southside Chicago rapper M A E S T R O is no newcomer when it comes to the entertainment industry. With more than two decades of experience in the business, the 26-year-old has made a buzz in almost all of his artistic endeavors. He has acting credits from shows such as The Wire (where he played Randy), Cold Case, and more recently the Comedy Central show Drunk History where he played Louis Armstrong.

But he didn’t start out in the music industry as a rapper. He has earlier experience with creating EDM music such as club hits “For You” with Dzeko & Torres, which has more than 5 million Spotify streams. With producing being one of his many talents, he created “Groovy” for Famous Dex and Dice Soho and even played piano on rap legend Nas’ song “Life is Good.”

In 2017, M A E S T R O’s creative talents directed him to the world of rap when he released his singles “Which One Which” and “Woke Up.”

His forthcoming debut mixtape, Wav God, will be released this year.

HipHopDX chatted with M A E S T R O before he hits our Rap Rising showcase at SXSW stage this year.

First time performing at SXSW. Excited and appreciate HipHopDX for the opportunity.

I’m mostly excited to see how the crowd reacts to the new music also connecting with other artists who I might not have had the chance to connect with if it wasn’t for SXSW.

Do you plan on watching other performances?

Def wanna check out Buddy, J.I.D, the homie Kodie Shane, Madeintyo, Maxo Kream, Smokepurpp just to name a few. But also keeping my eyes open to discover any new artist who out there also.

I’d say just making sure you get the flow of the show right is most important. Performing new records for people who might not be familiar yet ain’t always easy lol so you gotta find a way to lock in the crowd early and I think song selection is a big part of that.

It’s crazy — I been in entertainment so long I don’t really remember what my first paid gig was lol. Just know it probably came around the age of 5 and I ain’t slowed down since.

Shameless self-promotion my fav article gotta be the one you guys wrote on my last video release. Def agreed with everything on that one.

If you’ve watched The Breakdown, what was your favorite episode? Did you agree or disagree with it?

I love Real Hip Hop vs. Fake Hip Hop part one and part two. I like them because not only did I learn a lot about Hip Hop from watching it, but it also addresses a lot of stereotypes about different artist and the genre as a whole. Def feel like this is something more people should watch before commenting on Hip Hop and the culture.

If you could let your fans know one interesting fact about yourself what would it be?

I started piano lessons at 4 so I’m classically trained. Also, Maestro is my birth name.

Check out M A E S T R O at DX’s Rap Rising showcase at SXSW on March 16 at The Parish.