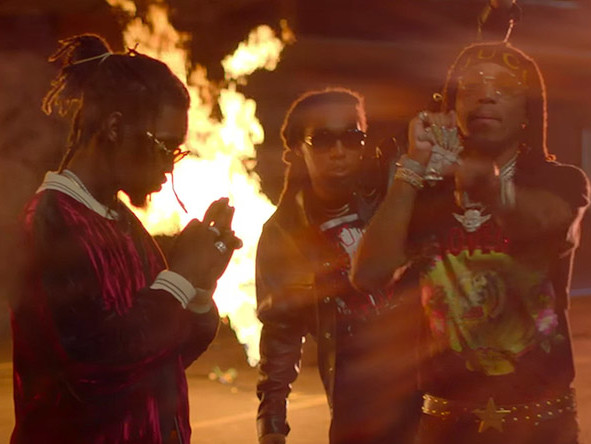 Migos have a new Top 10 hit in “Walk It Talk It” featuring Drake. With the Grammy Awards recently passing, there was a bump in sales for all those nominated, including Kendrick Lamar whose DAMN. single “LOVE.” resurfaced into the Top 10. Also, Childish Gambino’s performance of “Terrified” on the award show helped earn him the highest debut of the week.

Elsewhere on the chart, Drake holds it down at #1 with “God’s Plan” for the second week in a row and Post Malone’s “Rockstar” made its way back up to #2.

Migos snagged a #3 smash with “Walk It Talk It” featuring Drake off their recently released album, Culture II. The song sold 24,367 in digital downloads for the week ending on February 1.

Kendrick Lamar’s “LOVE.” shot up the R&B/Hip Hop Single Sales chart 43 percent this week to #7. It should be no surprise that Kung Fu Kenny, who won Best Rap Album for DAMN. at the Grammys, would have his music return to the Top 10.

Childish Gambino Earns Highest Debut Of The Week With “Terrified”

Childish Gambino put on a powerful performance of “Terrified” at the 2018 Grammy Awards. As a result, the Awaken, My Love cut broke into the charts at #27, making it the highest debut of the week with 6,443 in sales.