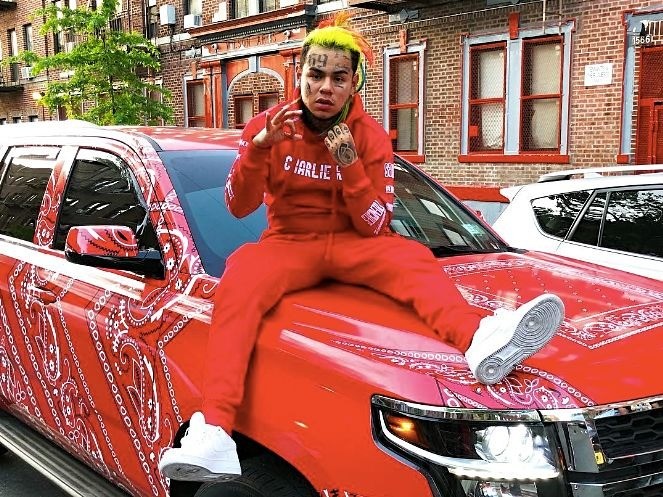 Los Angeles, CA – Another day, another incident involving Tekashi 6ix9ine. After the controversial rainbow-haired rapper was though to be involved in an alleged shooting with Fetty Wap’s crew outside of a Los Angeles recording studio, he’s now given Chief Keef 48 hours to kill him.

In an Instagram video posted on Thursday (May 31), the DAY69 rapper said, “Nobody give a fuck about what y’all niggas did three years ago. I don’t think y’all understand what I was talking about in my last video. What y’all did four years ago, three years ago in livin’ y’all raps, you don’t do. I know that personally.

“What y’all going to give me 48 hours? When? When am I going to die? Fuck Chief Keef. Fuck Lil Reese. Fuck all them niggas.”

He captioned the video, “IF I DONT DIE IN 48HRS YALL PUSSY FOREAL ‼️ READ ABOUT WHAT HAPPEN WHEN NIGGAS BEEF WIT US.”

The 22-year-old Brooklyn native doubled down with a second Instagram video backing up his belief all rappers are lying in their lyrics.

The tough talks follows the Fetty incident, which reportedly went down on Wednesday (May 30).

According to TMZ, the “Gummo” rapper tried to meet up with Fetty at a Los Angeles recording studio but before he could get inside, he got into a confrontation with Fetty’s entourage. Someone pulled out a gun and fired a couple of shots into the air.

Subsequently, a witness called the police but by the time officers arrived on the scene, everyone had fled.

Police reportedly recovered shell casings and are actively looking for the shooter. Fetty was supposedly out of town when the alleged incident occurred and 6ix9ine has since denied it ever happened but confirmed the countdown to take him out is still on.

“TMZ I love y’all but that’s not true Fetty Wap MY brother,” he said in another Instagram video. “The clock still ticking…. I don’t believe y’all raps. Y’all gonna have to prove it I think niggas just take credit for other people’s gun.”