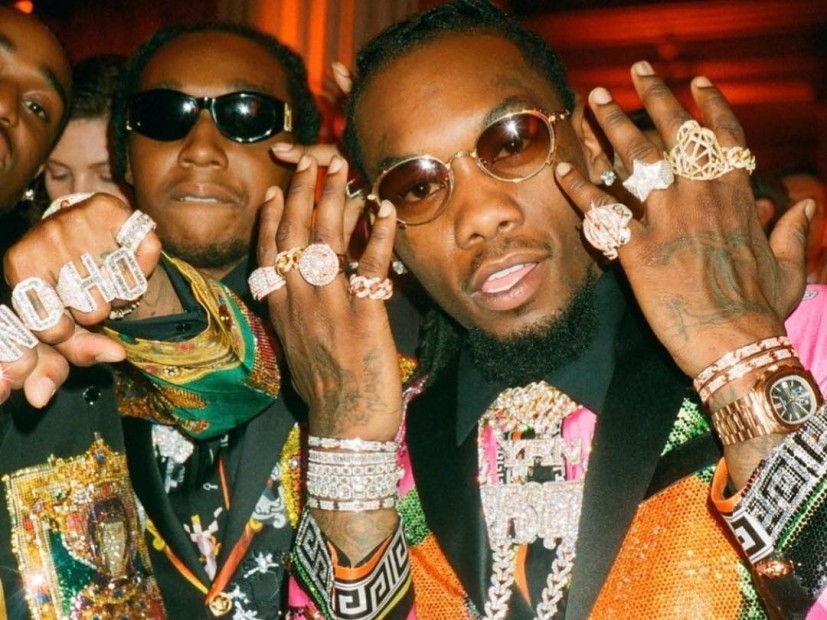 Atlanta, GA – Following Offset’s recent Atlanta car crash, the Migos rapper is already back in the studio. In a clip obtained by TMZ, the 26-year-old showed off his injuries while sparking up a blunt at the same time.

Offset’s hand is wrapped in a white bandage, and he has several smaller cuts and scrapes on his arm.

The Atlanta native shared more of the accident photos on his Instagram account, revealing the damage done to not only his car but also himself.

The wreck occurred on early Wednesday morning (May 6) around 2:30 a.m. local time. Offset’s apple green Dodge Challenger was found by police but he was nowhere to be found. He reportedly went to the hospital with minor injuries and fiancée Cardi B rushed to his side.

Police are currently investigating why Offset left the scene.

After Offset crashed his Dodge Challenger in Atlanta early Wednesday morning (May 16), police are now reportedly trying to figure out why the Migos rapper left the scene.

According to TMZ, the crash occurred at 2:30 a.m. local time but Offset didn’t call police to report the accident. A passerby alerted authorities. When police arrived, the wrecked car was found abandoned.

Sources say after the tow truck arrived, two unidentified people pulled up in a different vehicle and one started removing items from the Challenger. A source added that the person said the “MotorSport” superstar swerved to avoid hitting a pedestrian who had walked out in front of him but police have been unable to confirm Offset was behind the wheel or if anybody else was with him.

Following the accident, Offset was briefly hospitalized for minor injuries. His fiancée Cardi B rushed to his side and hit social media on Thursday (May 17) to count her blessings.

Sooo grateful and happy today .God be giving messages in the weirdest way 🤔I love you @OffsetYRN ❤️❤️❤️

(The original version of this article was published on May 17, 2018 and can be found below.)

Offset was reportedly left with minor injuries after crashing his Dodge Challenger on Wednesday night (May 16). The Migos rapper was in his hometown of Atlanta when the accident occurred.

According to TMZ, Offset was taken to the hospital and released shortly after. Fiancée Cardi B reportedly met him at the hospital to be by his side.

Law enforcement reportedly add that no police or emergency medical workers were called to the scene, and no accident report was taken. Offset’s totaled Challenger was towed away.

In a recent interview with Howard Stern, Cardi revealed the couple was shopping for houses in the ATL.

“It’s more than a relationship,” she told Stern. “We are planning to build a really big future.”

Offset and Cardi are expecting their first child this year.