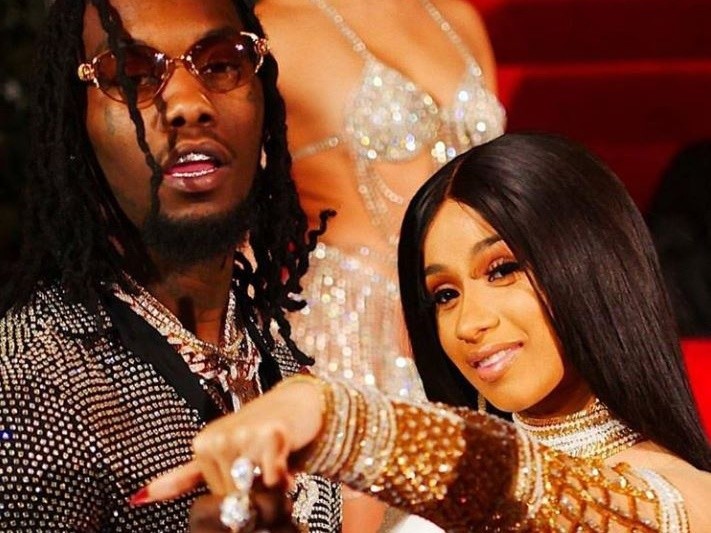 New York City, NY – The rumors are true — Cardi B is pregnant and Offset is the father.

The mother-to-be casually debuted her baby bump wearing a tight, white dress during a performance of “Be Careful” off her debut album Invasion of Privacy on Saturday Night Live on Saturday (April 7).

Prior to the big baby reveal, Cardi performed a Spanglish medley of “Bodak Yellow” and its single successor, “Bartier Cardi.”

After her performance, Offset tweeted that he’s looking forward to their future together.

This will be the 25-year-old rap star, born Belcalis Almanzar, first child and fiancé Offset’s fifth. The Migos member proposed to Cardi at a Philadelphia show October 2017 with a $550,000 8-carat ring, despite an alleged sex tape involving the “Bad and Boujee” rapper.

Rumors began of a possible pregnancy in February after TMZ first broke the news that representatives from the “Bodak Yellow” artist’s team told a Super Bowl event staffer that she was three to four months pregnant. When she hits the stage for Coachella this month, she will be close to seven months.

Both Offset and Cardi dismissed the rumors as fiction with Cardi responding to a speculators in her Instagram comments about it saying, “No bitch I’m just getting fat. Let me fat in peace.”

Cardi is definitely celebrating the reveal as evident by a backstage video of her shouting out that she’s “finally free.”

HipHopDX extends its congratulations to Cardi B and Offset. Watch Cardi’s pregnancy reveal on SNL above.