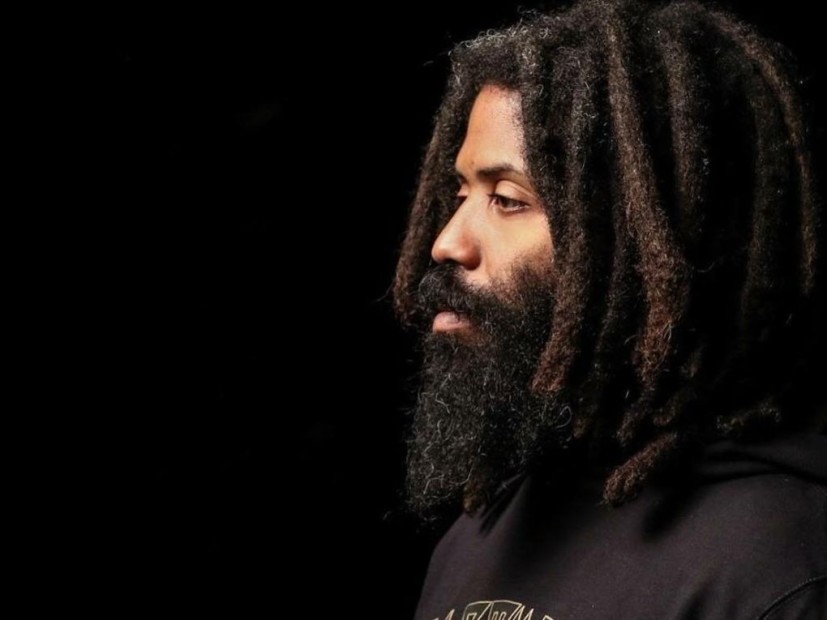 Fort Collins, CO – As Murs readies the release of his next album, A Strange Journey Into The Unimaginable, the host of HipHopDX’s The Breakdown, has spent the past week in Colorado doing shows and popping up at random speaking engagements.

On Saturday (February 17), The Music District in Fort Collins, Colorado hosted a conversation with Murs spearheaded by Flobots’ MC Stephen “Brer Rabbit” Brackett. From losing his infant child to his experiences with Los Angeles gang culture, the Strange Music Inc. signee was candid about his journey thus far.

At one point in the discussion, Murs explained how his love of nerd culture not only gave him the idea for his engagement rings but also helped shape his career.

“This is my second marriage,” Murs said. “This time when I got engaged, I wanted to make rings that meant something. I had Han Cholo, who’s a nerd jeweler, make us class rings. One was the Rebel Alliance class ring, which was red and one was a Sonic The Hedgehog class ring, which was blue. I come from a gang culture in L.A. that I really respect. It’s taught me so much. It gets a negative rap, but gang culture was good for me.

“So, red and blue symbolized Bloods and Crips, and unifying with my wife. I knew we were going to get different rings, but when I asked her to marry me, I wanted it to be with something that I believed in. Sonic The Hedgehog, Star Wars, Bloods and Crips fit perfectly in my life [laughs].”

When asked how gang culture and his preference for “nerdy things” helped shaped who he was, Murs admitted he thought it “destroyed” his career.

“I think it destroyed my career in terms of sales,” he said with a laugh. “No one could relate to that. I didn’t own an album by a white person. Only album I owned by a white person was Vanilla Ice up to 2003. I never heard The Beatles, Sublime, Rolling Stones. I discovered all that via Slug of Atmosphere and making white friends, which I didn’t have. I didn’t know there were any other kind of white people outside of surfers. All the white people in L.A. were affluent, skaters, surfers or Jewish. That’s it. I didn’t meet Jewish people until high school.”

Murs has made three albums with Slug under the Felt moniker starting with 2002’s Felt: A Tribute To Christina Ricci. Although he’s never reached the same level of success as the Rhymesayers mastermind, it doesn’t really bother him.

“We made great music together,” he said. “Slug does much better than me sales-wise because for Americans, it’s easier to see a white person talk about the things he talks about. They wanna hear black people talk about gang violence because that’s what they’re accustomed to hearing. The Mr. Lifs and Jean Graes, and Flobots possibly, we get kind of get pushed to the side, while Slug will get this huge fanbase. We’re making intellectual rap, for better or worse. Even with my four letter words, it’s still 10 times more enlightening than Ice Cube ever was but I think Ice Cube is a way better rapper. The number of intellectuals in this country is very small. The number of black people within that community is so small.”

He added, “I never took it personally. I’m an anomaly. There was no Tyler The Creator. There was no Kendrick Lamar. There was no J. Cole. You had to be all the way Mos Def and Talib Kweli, and I don’t listen to any of that shit, because that wasn’t my reality.”

Despite his exposure to gang violence growing up, his music has never focused on it like many of his contemporaries’ music did. He believes replicating what pioneers like Cube and N.W.A created doesn’t honor their legacies.

“I grew up on gangsta rap, but that’s not who I am,” he explained. “But that’s my journey. So when I make music, that’s not my voice and I felt what Ice Cube was doing was very revolutionary. No one was saying what he was saying. My mother was like, ‘These idiots will never have a career. No one wants to hear anyone say ‘fuck’ or ‘nigga’ or any of that. They’re never going to make a million dollars.’ Well, guess what?

“But instead of seeing them as pioneers, everyone just repeated the same thing. I thought that was so disrespectful to those artists who kicked in the door. My job is to revolutionize in another way. I have all the rights and all the same stories — I have a single mom and friends who have been shot — but if I make the same music as you then I’m not honoring your legacy. It’s been 20 years of people making the same ignorant, violent decadent music, and it destroys me, so I choose to do what I do, and accept a smaller fanbase. But I’ve made a living for 22 years and I’m a former drug dealer. I sold a lot of weed to fund my rap career. I didn’t get a Bentley but I’ve done well for myself. I made my mom and my whole family eat their words.”

“With gangsta rap, this is a real civil war,” he said. “I’m a product of it. It’s very real. It’s not glamorous. More children die in L.A. County alone every year than in Desert Storm when it was an active war. That’s just Los Angeles. There’s tens of thousands of black kids dying every year. But to Americans, it’s entertainment.”