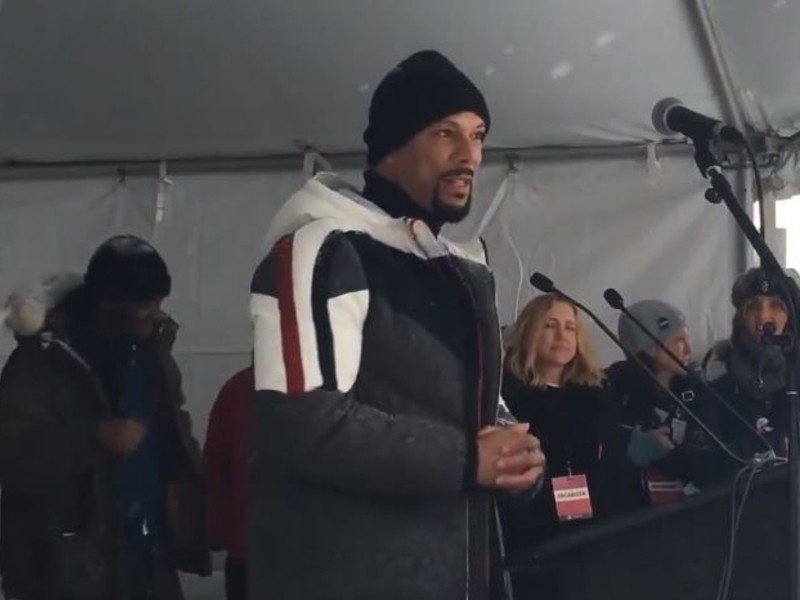 Park City, Utah – Protesters around the country hit the streets for the 2018 Women’s March, which took place on Saturday (January 20). One of the demonstrators was Common, who spoke at a rally in Park City, Utah and spit a verse in honor of women protesting.

“The New World Order is fathers loving their daughters/ And baby’s mamas supported and ladies gettin’ courted/ In court, kids can’t be tried as adults/ And women, they called bitches because they a boss/ In all shapes and sizes, beauty is recognized/ Goddess and queens is what we use to describe/ Now Michelle Alexander wrote the new constitution/ Beyoncé made the music for the revolution,” he rapped.

Common’s bars come from the second verse of his song “The Day Women Took Over.” The track appears on his 2016 album Black America Again.

THE TAKEOVER: @Common raps about a day when women have parity with a powerful verse at the Park City, Utah #WomensMarch2018 pic.twitter.com/cxQdW1jBiI

The veteran MC’s appearance at the Women’s March was just the start of a busy day, which was capped off with the premiere of his new film, The Tail, at the Sundance Film Festival.

“It was a really good day at Sundance yesterday starting with The Women’s rally and ending with the premiere of #TheTail,” he wrote on Instagram. “It’s a must see but brace yourself it hit me hard.”

Watch Common’s performance at the Women’s March above.