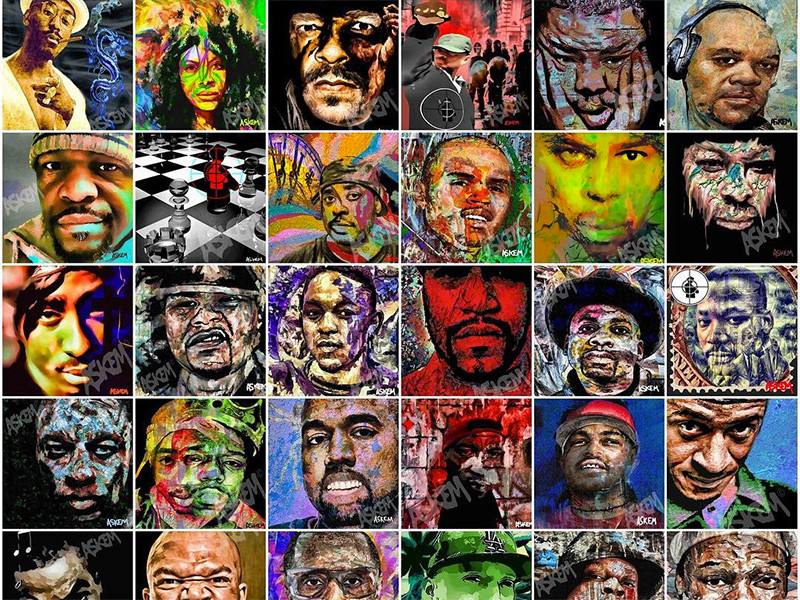 A new book by Chuck D — released in October — aims to bridge the knowledge gap in Hip Hop. This Day In Rap And Hip Hop History is a thorough collection of milestones, birthdays and essential releases that helped shape the culture we all hold dear.

Askem got involved in the book’s creation thanks to his working relationship with the Public Enemy frontman.

“I’ve been working with Chuck for about five years now, producing art for RAPstation as well as cover artwork,” Askem told HipHopDX. “Chuck approached me to be involved with the book about two and a half years ago. I got a text in the middle of the night, and I was like, ‘Wow, yeah, this sounds fantastic.’”

Askem’s foray into Hip Hop artwork came after what he calls a “very dark” period in his career. That all changed when he crossed paths with Chuck D at the premiere of The Art Of Rap film.

“It was like a lightbulb moment,” he revealed. “I thought why not combine [my art and love of Hip Hop] and start immortalizing your heroes?”

As Askem sees it, This Day In Rap And Hip Hop History is just the first step toward bridging the gap in Hip Hop.

“Yes, we might not like some of the styles, but these guys are trying, and they’re artists, and they’re putting their life and soul into what they’re doing. People said the same things about N.W.A.”

One thing Askem does acknowledge is the fact that artists like Chuck D have been able to adapt seamlessly to the current landscape by utilizing tools like social media and podcasting to reach new audiences. In turbulent times (from a socio-political perspective), their original lyrical content is as relevant as ever, and young fans are taking notice.

“I saw Prophets of Rage in London in July or August, and it was a moving experience to see all these young dudes and girls jumping all over the place like complete lunatics,” he said. “They were going crazy, and on the stage, is Chuck, and B-Real is dropping the same lyrics that I was nodding my head to with my friends that had high top fades and Jordan 4s when they first dropped. It’s insane.

“It’s really powerful … I just wish there were more artists from that era were willing to do it. I’m starting to see a lot more people step up and stand to be counted, and I hope this book helps to galvanize people as well to do that and to start seeing that they play a fundamental role in terms of who they are and what they are, certainly from an artist’s perspective.”

Askem’s career is taking him places he never imagined and his pace isn’t slowing down. He ranks his experience working on this book as one of the most significant of his life.

“I felt as though I was giving something back to Chuck personally, and to Hip Hop for what it’s given to me because it’s given me so much experience,” he noted.”

View some of Askem’s work below and grab a copy of This Day In Rap And Hip Hop History here.