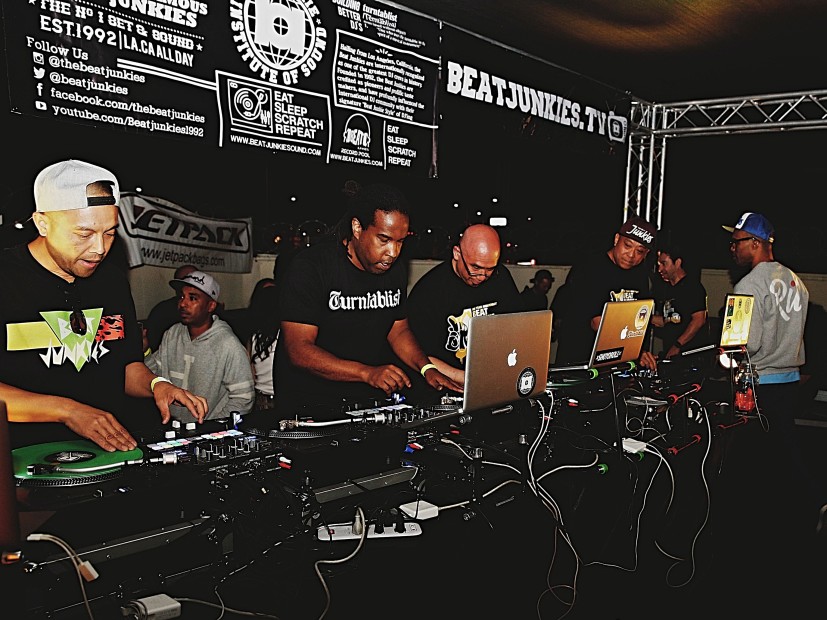 Glendale, CA – The Beat Junkies celebrated the one-year anniversary of the Beat Junkie Institute Of Sound on Saturday (April 14) in Los Angeles.

Several members of the renowned turntablist crew — including DJ Babu, D-Styles, DJ Rhettmatic, J Rocc and Mr. Choc — were on deck to host the event, which was held outdoors at the acclaimed DJ school.

Over the past year, Rhettmatic has embraced his new role as teacher but has really learned the most from watching his peers.

“Teaching is a whole other beast in itself,” Rhett tells HipHopDX. “For me personally, I’m really still learning how to teach because it’s not easy. I really gotta hand it to Choc and Babu to be able to teach our very own curriculum to our student body, and be able to explain it to them in such a way that they can pick it up easily and learn from it. Choc and Babs have really made a high bench mark in terms of teaching. I hope one day I can teach as good as them.”

“I’ve learned to give with no expectations of any sort of return,” Babu adds. “Sharing and teaching has been very rewarding or should I say enriching? Give us another year or two, and god willing I can then say it’s rewarding [laughs]. I see BJIOS continuing to grow and I see it becoming the benchmark for all DJ schools around the world.”

Nu-Mark, who is currently working on the TBS show Drop The Mic with host Method Man, found himself inspired after event.

“After watching all these amazing home grown talents perform, I realized as I was watching the Beat Junkies that they’ve built an amazing foundation/community for upcoming DJs,” he says to DX. “The next generation owes the Junkies proper respect.”

Fellow Beat Junkie Melo D, who was unable to attend the festivities, spoke on the future of the BJIOS.

“Aside from being able to demonstrate DJ techniques, there’s also an art form to being able to explain in words how to execute these techniques,” Melo D says. “We are so used to just doing certain moves and relying on muscle memory that we forget exactly what we are doing step by step. When we see that lightbulb go off in our students, when they get it and you can see the excitement in their face, that’s the most rewarding.

“So, in the future we are taking the school online. We would love to teach people globally around the world and will start offering online classes soon. Look out for BeatJunkies.TV coming soon, too.”

“To actually see the smiles on the faces of our students — both kids and adults — when they achieve something that they worked really hard on and it finally clicks is the best part,” he says. “To able to share our passion and knowledge with anybody who wants to learn about our culture, it’s very humbling when they say they truly appreciate us, our staff and our school.

“I don’t know what the future brings but I hope the BJIOS will be around for a long time and continue help cultivate the culture that we, the Beat Junkies, love so dearly.”

Visit the BJIOS website for information and check out more photos of the event below.