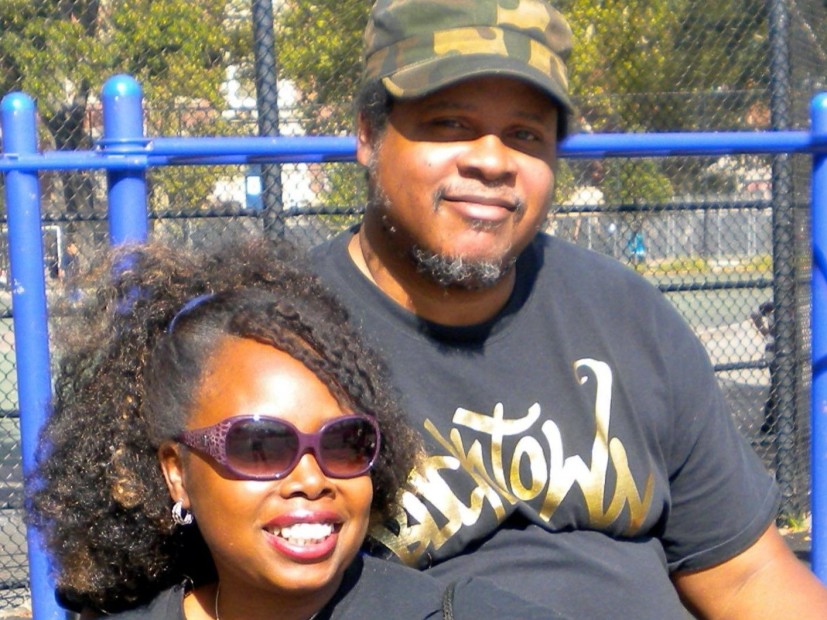 It was the summer of 1979. Lady-E had just moved into the Bedford-Stuyvesant neighborhood of Brooklyn, unknowingly two blocks away from Cozmo D’s grandmother’s house. They were blissfully unaware of what fate had in store for them. Not only did the two end up forming the Hip Hop group Newcleus with Nique D and the late Chilly B, but they also kicked off what is now a 39-year love affair.

“Some of the girls on my block were MCs for Jam-On Productions,” Lady-E explains to HipHopDX. “That’s the DJ crew Cozmo started with his cousins – one of who was Nique D. They invited me to Coz’s 20th birthday party. We met and he asked me to dance. All the while I was trying not to look like I was 16. I felt like a kid but I was trying to act like I was down, you know.

In 1980, during her senior year at Manhattan’s Fashion Industry, Lady-E was getting off the C-Train at the Chauncy Street station in Brooklyn. She quickly realized Cozmo, who was a prolific graffiti writer at the time, had made the same trip earlier that day.

“I came up the train station stairs and saw this big tag on the station wall that said, ‘Eyvette, will you marry me, Love Cozmo,’” she recalls. “I stopped dead in my tracks and just stared at that wall – almost like I didn’t recognize my name [laughs].

“People were walking by and saying, ‘Wow, I hope she sees this,’” she continues. “What was even more amazing was that, back then, the station cleaners were strict and tried to keep the walls graffiti-free. But this time, they left that tag up to fade away. They didn’t clean that wall so I saw it every day for months. It’s probably one of the most romantic things that I’d ever seen then or since.”

“I wish I could say that I was more romantic,” Cozmo tells DX. “I try to be but I am just not much of a romantic person. So I do my best to remember the basics like Valentine’s Day and anniversaries. But what we do have in abundance is devotion. We are devoted to each other and we are best friends, so we do almost everything together. We share so many interests and likes, and we cherish each other’s company. I won’t say this takes the place of romance, but I think that it helps.”

Lady-E adds, “I just know that we feel ‘off’ when we are not together — a big reason why we don’t spend nights away from each other.”

Minus the grand gestures of love, Lady-E knows what it takes to make a marriage last all these years.

“It’s probably more about being a friend to each other, trusting each other, being honest with each other, not always agreeing with each other but never cursing and disrespecting one another,” she says. “It’s about trying to be each other’s biggest supporter, especially when others try to tell you how to handle your relationship bumps in the road.”

Newcleus, whose iconic “Jam On It” single helped catapult the group to notoriety in the ’80s, fused electro and Hip Hop into its own unique concoctions. “Jam On It” has been sampled by numerous Hip Hop artists, including Mos Def, The Game, Slum Village, Jaylib and Will Smith (just to name a few). It’s also been featured in video games like DJ Hero 2 and Dance Dance Revolution in addition to being highly regarded as one of the best breakdancing songs in Hip Hop history.