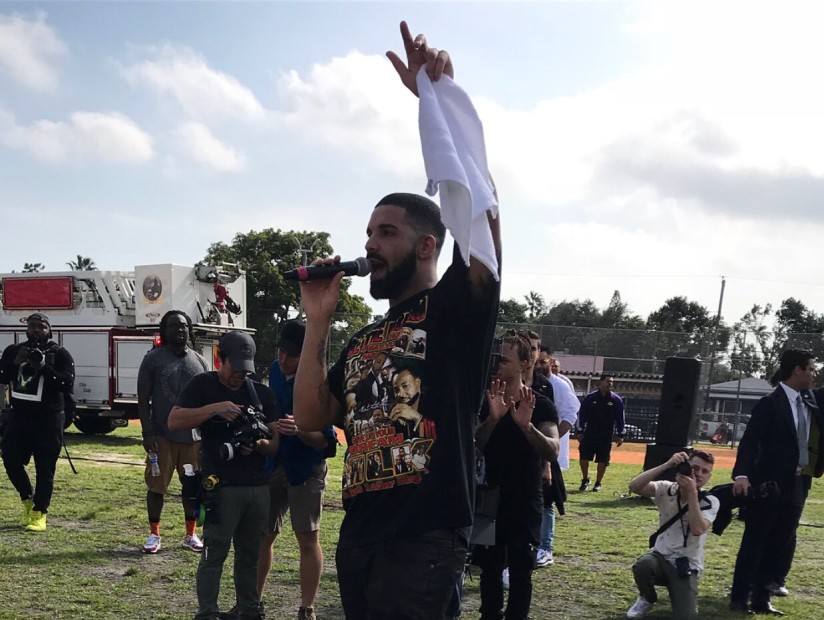 Miami Beach, FL – Drake gave students at Miami Senior High School quite the surprise on Monday (February 5). The teenagers’ school day suddenly turned into a video shoot when Drizzy showed up to film part of the video for “God’s Plan,” which broke U.S. Spotify streaming records upon its release and currently sits at #1 on the Billboard Hot 100, on their campus.

The 6 God also donated $25,000 to the school and announced he would also be buying them all new school uniforms, NBC Miami reports.

Video footage from the video shoot quickly made its way to social media, including a shot of Drake rapping from a crane while a drone hovers above his head and a horde of high schoolers chant along to “God’s Plan.”

After making a bunch of high school kids’ day, Drake made his way to the University of Miami and was met with a massive crowd.

HAPPENING NOW: students singing to @Drake who is on the Moss Terrace in the Shalala Student Center. pic.twitter.com/VvNxYUQNhN

Drake released “God’ Plan” as part of his his surprise EP Scary Hours. The single debuted on the Hot 100 at #1 and remains in the top spot for the second week in a row.